The Evils of Plagtracker

I mentioned in an earlier post how I was really distressed that the main piece of advice circulating on the discussion boards for the course was that people without any special training or understanding of plagiarism should use Plagtracker (or similar) to check on essays. What a terrible piece of advice! There are now quite a few people who are indignant that they are not getting comments back on their work, except for a Plagtracker report telling them that they essay is 20% plagiarized or 30% plagiarized or some such nonsense. I feel so badly for those people - especially because Plagtracker cannot tell the difference between quoted material that is being used specifically for as a supporting quotation and actual plagiarism.

So, out of morbid curiosity, I decided to test my own recent essay with the evil Plagtracker (I'm not even going to link to them from here; really, there is no good reason ever to go there). And what happened? My essay is 40% plagiarized! And why? Because it contains four quotes from the novel (Plagtracker ignored two quotes that were just tiny phrases). What does Plagtracker cite as the sources for my plagiarism? My sources are ... Shelley's novel! The source list contains one website after another, each of which republishes the text of the Shelley novel; since the novel is in the public domain, it appears at literally hundreds of websites online.

Even worse, for some reason, Plagtracker considers the entire sentence containing the quote to be suspect and highlights it as such. Because I tend to write in long sentences (yes, I have learned to stop worrying and love the semicolon), this means that my quotes from the novel are embedded in long sentences, all of which got flagged as plagiarism, as you can see in the screenshot below.

This is exactly what people reported on the discussion boards also: because they included a quotation from the novel, they were deemed "plagiarists" by peer reviewers who were using Plagtracker without any understanding of how to interpret the results. I wish Professor Rabkin had addressed the serious problem of people using this type of software in his statement on plagiarism; it seems to me that no good whatsoever can come of this software - not to mention the ethical problem of putting someone else's writing into a commercial database without their permission. At least I have the right to put my own essay in there, as well as the experience to simply laugh at the results. 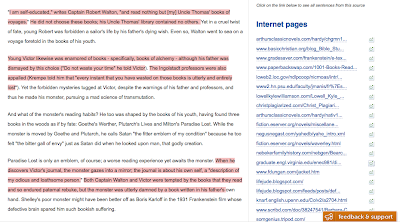