In a previous post, I had mentioned a boilerplate email from the teaching assistant for our course which thanked us for all our great contributions at the discussion boards, but didn't respond to any of the concerns that had come up there. Well, we got another boilerplate email this morning from the professor to let us know that the videos were available for the unit we just finished (Dracula); here is the text of the email: "I hope you enjoyed your reading in the unit and, if you used them, the Forums. Now you can view some video clips that I've recorded and, if you've submitted an essay of your own, read essays by some of your fellow participants. Please comment on at least four of those essays and return the Peer Responses work by the deadline, about forty-eight hours from now, so that others can learn from you and you can learn from them."

So, in what sense is it fair to say that the email came from the professor? In a sense, it didn't at all - it's just a canned email, something going out automatically, planned from the start of the class. In fact, because of some software problems with the peer review assignment system, the peer reviews are NOT actually ready according to the timetable that was originally announced, so even though we got an email telling us that the essays were ready for review, they were not actually ready at all (which of course led to people posted questions at the discussion board, asking why they had not gotten any essays to review as stated in the email).

As I've written about in previous blog posts, communication - lively, personal, timely, clear communication - is vital in any online course, especially in a massive one like this. So far, Coursera does not seem very attentive to this aspect of the course at all. Based on the past couple of weeks, I foresee no changes in the future, just more canned emails. I wonder if there will ever be an update to the homepage announcements at all… or if instead the homepage is an eternity out-of-time like some Wonderland Tea Party, where it will always and forever be time to submit the second assignment!

Update:  There is an announcement today, Aug. 14, referring people to two memos from the professor about the plagiarism problem and also about the workload. To be honest, I really don't think the plagiarism memo is written in a way that will be helpful to the students who are prone to plagiarize - but it is an acknowledgment that the problem exists (as for the specifics, well, I think the problem is likely to persist until somebody grapples with the specifics of just what plagiarism is, and what peer reviewers are supposed to do about it exactly, how to document an incident of plagiarism if it is undeniably obvious, etc.). Interestingly, no comments are allowed on either item, even though they appear at the discussion board. 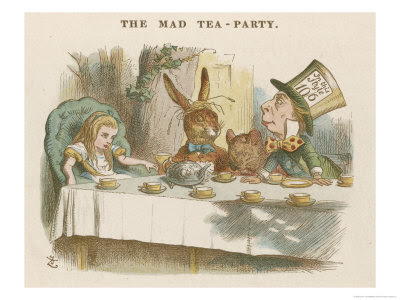