When I read Shelley's Frankenstein (I had never read it before!), I knew instantly that I wanted to write about the monster discovering those books in the woods. So, I've written my essay (see below), and the mirror theme is definitely taking hold here; I've had mirrors in my last three essays. Since I would really like for there to be a theme that brings all my essays together, just to give the writing project for this class a more coherent purpose, I think I am going to go back and write another Grimm essay. From the start of the semester, I knew I wanted to do identity in some sense - but now I have really zoomed in on the idea of mirrors, doubles, emblems, etc. So, here is my Frankenstein essay and this weekend I'll poke around in the Brothers Grimm to do a mirror essay for that entry also just to try to give the writing a real sense of continuity.


"I am self-educated," writes Captain Robert Walton, "and read nothing but [my] Uncle Thomas' books of voyages." He did not choose these books; his Uncle Thomas' library contained no others. Yet in a cruel twist of fate, young Robert was forbidden a sailor's life by his father's dying wish. Even so, Walton went to sea on a voyage foretold in the books of his youth.

Young Victor likewise was enamored of books - specifically, books of alchemy - although his father was dismayed by this choice ("Do not waste your time" he told Victor). The Ingolstadt professors were also appalled (Krempe told him that "every instant that you have wasted on those books is utterly and entirely lost"). Yet the forbidden mysteries tugged at Victor, despite the warnings of his father and professors, and thus he made his monster, pursuing a mad science of transmutation.

And what of the monster's reading habits? He too was shaped by the books of his youth, having found three books in the woods as if by fate: Goethe's Werther, Plutarch's Lives and Milton's Paradise Lost. While the monster is moved by Goethe and Plutarch, he calls Satan "the fitter emblem of my condition" because he too felt "the bitter gall of envy" just as Satan did when he looked upon man, that godly creation.

Paradise Lost is only an emblem, of course; a worse reading experience yet awaits the monster. When he discovers Victor's journal, the monster gazes into a mirror; the journal is about his own self, a "description of my odious and loathsome person." Both Captain Walton and Victor were tempted by the books that they read and so endured paternal rebuke, but the monster was utterly damned by a book written in his father's own hand. Shelley's poor monster might have been better off as Boris Karloff in the 1931 Frankenstein film whose defective brain spared him such bookish suffering. 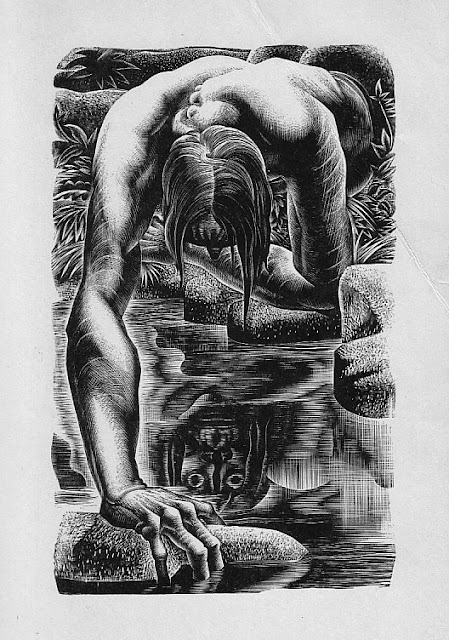 (The Monster Gazes into a Pool, Lynd Ward: web source)