The Lion and the Unicorn: An Aesop's Fable from Medieval England

Someone in class wrote up a wonderfully detailed and informative blog post about the story of the Lion and the Unicorn as told in Through the Looking-Glass. There's all kinds of information and illustrations, too, showing how Tenniel modeled his own drawing for the scene on Disraeli (the unicorn) and Gladstone (the lion) - here is a link to her blog post: A Little Background on the Lion and the Unicorn.

I thought I would contribute something from way out in left field - a very obscure (and I mean very very very obscure) Aesop's fable about the lion and the unicorn. As far as I know it is recorded in only one written source, the fables collected by John Sheppey, Bishop of Rochester, in the 14th century (he could have gotten it from a more complete version of the 13th-century fabulist Odo of Cheriton than what we have now - but, if so, that version by Odo is lost and all we have is what is recorded by John). Anyway, here is the story; the Latin is down below and I've included an English translation here. It's part of a project I did two years ago, Mille Fabulae et Una: 1001 Aesop's Fables in Latin. (The Latin text has been slightly abbreviated, since I limited each fable in the book to 125 words or fewer.)

The Lion and the Unicorn. The lion pretended to be sick and, limping, he went up to the unicorn, his chief enemy, and greeted him. Then he said, "Whatever has taken place between us up until now, let it be forgotten, because I will not be able to do anyone any harm ever again, as you can see, since I am old and suffering from all kinds of infirmities. But before I die I greatly desire to speak once more with my wife, who is away in the desert, and I would ask you to loan me your horn, if you would be so kind, so that I could use it as a crutch on my journey, because your horn is quite long and strong. I will send it back to you as soon as I reach my wife, and on that I give you my word." The unicorn believed everything the lion said and felt sorry for his suffering, feigned though it was, so he gave the lion his horn, leaving himself defenseless. The lion then advanced on the unicorn and sprang; seriously wounding the unicorn with his own horn, he thus defeated him. 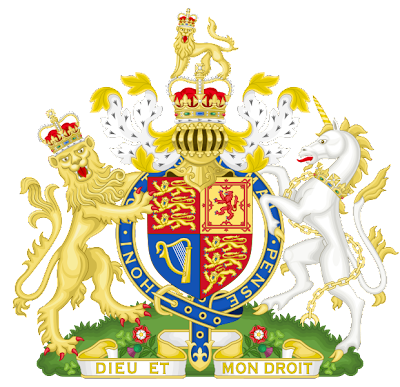 Image Source: Wikipedia. This is the lion and the unicorn as shown on the royal coat of arms of the United Kingdom.
Posted by Laura Gibbs at 8:18 AM

Email ThisBlogThis!Share to TwitterShare to FacebookShare to Pinterest
Labels: Alice