Mirror, Mirror on the Wall

As I've mentioned previously, I was hoping to find a common theme to use to make my mini-essays for the class into a coherent piece of writing, using each essay to explore the theme from a different angle. With the first week and the Brothers Grimm, I was really taken by the proof-tokens in Cinderella and The Robber Bridegroom, so I wrote my essay about that, thinking that I would like a "proofs of identity" as my general theme. It's a topic that is of long-standing interest for me and one that I could feel confident I would find cropping up in every book for the class; basically, it's a social and literary conundrum that crops up everywhere. Over the past few weeks, though, I've been zooming in on something more specific: the use of the mirror as a proof of identity, as well as the mirror as a deception and the mirror as a gateway. Literal mirrors, and metaphorical mirrors. Once I realized that I would be going in this direction, my Grimm essay really did not fit properly, so I decided to write a new Grimm essay today, one that will fit more nicely into the evolving collection of essays. So, here is that new essay:

Mirror, Mirror on the Wall

The Crane edition of Grimm contains only two stories about mirrors, but they are a perfect pair that illustrate the mirror's opposite functions: the reflecting mirror whose images appear real but are not, and the scrying mirror that instead reveals otherwise invisible truths.

In The Little Farmer, the mirror is deceptive, presenting an image that is alluring but unreal. The result in this story is fatal: the Little Farmer tricks the other farmers into drowning themselves by telling them they can gather up a herd of sheep from the bottom of the lake - sheep that were only clouds reflected in the mirror of the water.

In Snow-White, on the other hand, the mirror is a source of truth. This mirror does not just reflect the surface of things; instead, it is a "magic looking-glass," a device for scrying the truth. The evil queen knows that "the looking-glass spoke the truth," and so it did, giving the queen all the information she needed to monitor Snow-White at a distance. Things end badly for the queen, but it is not because she was fooled by an illusion in the mirror; instead, she was undone by Snow-White's own good luck.

In another Grimm story (not included in Crane), there is a truth-telling mirror in the possession of a good princess, rather than a wicked queen. The heroine of the The Crystal Ball has been cursed with an ugly appearance, but she has a truth-telling mirror that reveals her inner beauty, as she explains to the story's hero: "That thou mayst know what I am like, look in the mirror; it does not let itself be misled: it will show thee my image as it is in truth."

So, there are mirrors that lie, as well as mirrors that tell the truth. As for mirrors that provide a portal into another world, we must wait for Alice and her looking-glass to show us the way! 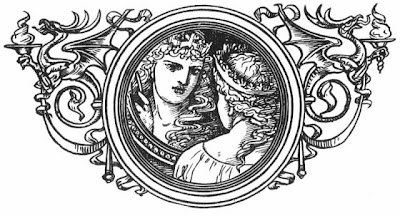 Crane, Lucy (translator). Household Stories by the Brothers Grimm, with illustrations by Walter Crane (1886). The illustrations on this page also come from this book. Online edition at Project Gutenberg.