The Farmer and the Snake

Professor Rabkin uses the fable of the farmer and the snake as an example to illustrate different ways of reading and interpreting a story. Since I am very interested in Aesop's fables (I published an English translation of the fables for Oxford's World's Classics some years ago), and since this is an especially fascinating fable, I wanted to record some thoughts about it from my own perspective here! :-)

The Aesopic fable of the farmer and the snake is one of the more unusual fables in the Aesopic corpus because it is really a full-blown folktale which has been added into the fable tradition because it features an antagonistic pair of main characters, with one of those characters being an animal (the snake). Aesop's fables usually do not have a plot as complex as the plot of this story, but the focus on the two antagonists with a "mistake made" and a "lesson learned" is characteristic of the fable genre, making it possible for the story to sneak into the Aesopic corpus. When Ben Perry was classifying the Aesopic fables (his numbering system is still a standard tool that scholars use in referring to the fables), he faced a real dilemma with this story and ended up included two different versions of the same story in his inventory, each with a different number.

Greek Aesop. Here is Perry's summary of the story he designates as Fable 51, which comes from Greek sources:


A snake bit a farmer's son so that he died. To avenge his son's death the farmer waited at the snake's hole and when the snake put out his head swung at it with an axe. In so doing he missed the snake and split the nearby rock. Having failed to kill the snake, and fearing his enmity, the farmer urged the snake to become reconciled and to live on friendly terms with him thereafter. Said the snake, "I can have no friendly feeling for you, when I see that cloven rock, nor can you have any for me when you look at your son's grave."

This version is found in the Greek prose Aesop and in the prose paraphrase of the poetry of Babrius, although this poem is missing from the incomplete copy of Babrius that has survived.

Latin Aesop. Here is Perry's summary of the story he designates as Fable 573, which comes from Latin sources:


A snake used to come into a poor man's house every day and eat crumbs from his table. Not long afterwards the poor man became unexpectedly richer; and it so happened that he became angry with the snake on a certain occasion and wounded him with an axe. In the course of time thereafter he was reduced to poverty again, and then he realized that his previous good fortune had been brought about by the snake, before the latter was injured. So the man implored the snake to forgive him, but the snake replied: "Because you repent of having injured me, I might forgive you; but so long as the scar on my body remains you can't rely on my good will, and I'll not return to friendship with you until I forget the perfidy of your axe."

This story is not reflected in the Greek tradition (that's why it has a number in the 500s; Perry tackled the Greek Aesop first, then the Latin), and is found only in the prose paraphrases of Phaedrus; the original poem by Phaedrus has not survived, although Zander and others have tried to reconstruct the poem on the basis of the existing paraphrases in Ademar and Romulus.

Missing piece of the puzzle: Panchatantra. The Greek tradition represented by Perry 51 is clearly a story that has suffered some confusing loss in content: a snake bites a farmer's son (the reason for this attack is not explained), and the farmer strikes the snake. The farmer later attempts to make his peace with the snake (the reason again is not explained), but the snake says that they can never forget their former grievances. In Perry 573, the motivations of the characters are more clear, and the function of the snake as supernatural source of wealth and prosperity is also much more clear. But why did the son kill the snake? To get some motivation there, we need to turn to an ancient Indian version of the story in the Panchatantra (there is considerable overlap between the Aesop tradition and the Panchatantra, so this comes as no surprise). In the Panchatantra story, the greedy son attempts to get all the wealth at once! That theme of greed would fit in perfectly with the Aesopic tradition, but somehow that element of the story has fallen out in Aesop. The snake punishes the boy for his greed by killing him; the father then attacks the snake in anger, as in Aesop, and is rebuffed by the snake when he attempts a reconciliation. The Aarne-Thompson number for this story is 285D, and you can read the Aesopic version, the Panchatantra version AND other versions at Dan Ashliman's webpage dedicated to this tale type.

For example, Ashliman includes a beautiful Cherokee story about the snakes' revenge which, while quite different in many ways from the Greek and Latin and Indian stories, has many wonderful features in common with it. I really like this story!


One day in the old times when we could still talk with other creatures, while some children were playing about the house, their mother inside heard them scream. Running out she found that a rattlesnake had crawled from the grass, and taking up a stick she killed it. The father was out hunting in the mountains, and that evening when coming home after dark through the gap he heard a strange wailing sound. Looking about he found that he had come into the midst of a whole company of rattlesnakes, which all had their mouths open and seemed to be crying. He asked them the reason of their trouble, and they told him that his own wife had that day killed their chief, the Yellow Rattlesnake, and they were just now about to send the Black Rattlesnake to take revenge.

The hunter said he was very sorry, but they told him that if he spoke the truth he must be ready to make satisfaction and give his wife as a sacrifice for the life of their chief. Not knowing what might happen otherwise, he consented. They then told him that the Black Rattlesnake would go home with him and coil up just outside the door in the dark. He must go inside, where he would find his wife awaiting him, and ask her to get him a drink of fresh water from the spring. That was all.

He then taught the hunter a prayer song, and said, "When you meet any of us hereafter sing this song and we will not hurt you; but if by accident one of us should bite one of your people then sing this song over him and he will recover."

And the Cherokee have kept the song to this day.

You can find many other marvelous Cherokee tales in Mooney's Myths of the Cherokee which is online at the Sacred Texts website.

For all that I love Aesop, if I were going to pick a story to retell in my own words, I would choose the Cherokee story. Just imagine the thoughts of the man on his way home, thinking about the events that are going to take place... 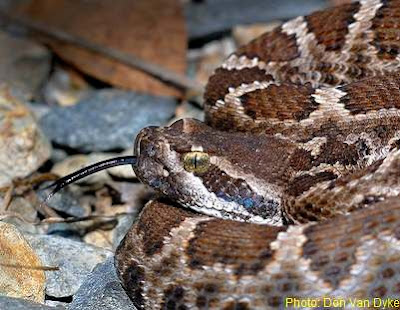 Email ThisBlogThis!Share to TwitterShare to FacebookShare to Pinterest
Labels: Aesop