Robber Bridegroom: I love this story!!!

Another one of my favorite tale types that shows up here in the Crane book of Grimm stories is The Robber Bridegroom (the version I know best of this story is the English Mister Fox, since we read that in the class I teach; if I have time this morning I'll write up a separate post about that). The plot itself is incredibly dramatic, of course - the woman who faces what seems like certain death but who manages to escape (with the help of another woman in this version!), and who is able not only to save her life but to bring about the destruction of her enemy in the end. Fabulous! It's a very memorable story where the plot is very well-motivated in terms of emotions, something you could call "realistic" (in comparison to the more fantastical Grimm stories), something you could imagine easily in a modern version as well... but the element of dream fantasy enters into this story in a brilliant way; that's one of the things I love about it. So, here's a list below of the elements of this story in this particular version that really stick with me:

But the girl did not seem to love him as a bride should love her bridegroom; she had no confidence in him; as often as she saw him or thought about him, she felt a chill at her heart. I really like the psychological development of the bride; she is clearly someone we sympathize with and we take her concerns seriously. I like her!

Suddenly she heard a voice cry, "Turn back, turn back, thou pretty bride, Within this house thou must not bide, For here do evil things betide." This might seem to be the most unrealistic element in the story, but I really like the idea that this could just be a talking bird, delivering its message a bit like an automaton - not understanding what it is saying, but nevertheless striking fear into the heart of the woman who hears the words.

You thought you were a bride, and soon to be married, but death will be your spouse. Fantastic! This old woman is not an automaton just parroting words; she speaks words full of feeling, and this encounter is intense! Like the bride, she is a very sympathetic character to me, albeit eerie and weird. What is HER story? If I were going to tell my own version of this folktale, I would imagine some kind of backstory for this old woman, a tale about how she came to be the servant of these evil men and just why she has chosen this woman in particular to partner with in making her escape.

They gave her wine to drink, three glasses full, one of white wine, one of red, and one of yellow, and then they cut her in pieces. What a gruesome way to use the one-two-three motif that is so characteristic of European fairy tales. Ouch!!! This element of the three colors of wine will show up when the bride retells the story in her own words, as a dream, later too!

Come to supper, and leave off looking till to-morrow; the finger cannot run away. IRONY! Love it! This is one of my favorite lines in the whole story because, of course, the finger can run away… if it is being carried by a living person.

The peas and lentils had budded and sprung up, and the moonshine upon them showed the way. GORGEOUS. In terms of visual motifs, this is my favorite moment in the story - it's beautiful and suggestive as well as being a practical element in the women's escape.

I will tell you my dream. YES: THE DREAM. To me, this is what makes the Grimm version of this story my favorite of all the different versions. I already see stories like these as being dream-like, and so of course I love the idea of invoking the dream mode itself within the story, using it as a way to introduce the truth by means of life-saving subterfuge. Amazing! Whatever storyteller first figured out that the woman should tell her experiences as if they were a dream gets the gold star from me! Excellent!

Sweetheart, the dream is not ended. And it's true: the dream/nightmare has NOT ended in more ways than one; until the robber bridegroom is defeated, the terrible dream world might yet come alive again.

And here is the finger with the ring! THE TOKEN REVEALED: I just love this! It's the macabre and murderous opposite of Cinderella's slipper - the token of death and hate rather than of love and happiness, and the token that will bring about justice in the end.

Man, I love this story… Maybe I will write my essay on dream motifs and/or identity tokens. Gosh, there is so much I love about these types of folktales that I will probably just have to let my Magic 8-Ball decide for me what topic to write on. :-) 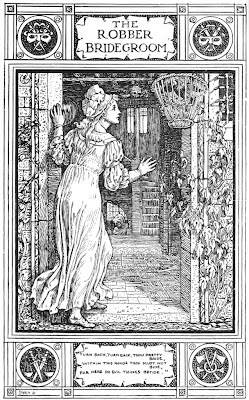