Below is something I posted over at the Coursera discussion board. I've always allowed anonymous comments on my blog posts and never had a problem with it, but then there usually are not that many comments on a blog post - I've never gotten confused about which anonymous is which, and I have never encountered the same kind of mean-spiritedness that motivates a lot of anonymous posters over at Coursera. So, I started the discussion below (which will no doubt get ugly) because I am sincerely curious if there are anonymous posters who would be satisfied with a pseudonym, or whether they are committed to anonymous - and I also really was struck by the notion of "invisibility" as explored so darkly by Wells as it applies to the anonymous world, esp. the anonymous culture at Coursera, at least in our course.

Meanwhile, by cutting and pasting into the blog post here, I learned that in the HTML code for the discussion forums, there is a student ID for every post... so the anonymous users do, in fact, have a hidden pseudonym, a numerical code that is visible to everyone in the raw HTML. Intriguing. I guess now if I really want to know how many anonymi are cluttering up a discussion, I can look at the HTML and count the number of student IDs for the anonymi!

Anyway, I'm no fan of a real-names policy like they have at Google+ (pseudonyms are fine with me), but I have developed a strong distaste for anonymous posting as a result of the Coursera experience. If anything of note happens at the discussion, I'll report back here. 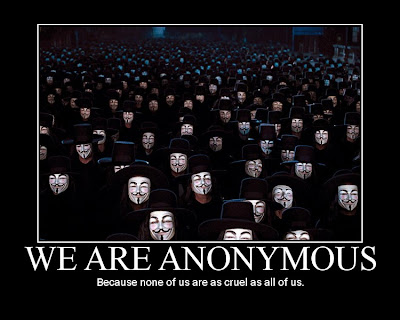 One of the most striking moments for me in reading the Invisible Man was when Griffin realized that his sense of untrammeled freedom, his high hopes at being invisible - "plans of all the wild and wonderful things I had now impunity to do" as he said - were simply an illusion. Instead of being free to do whatever he wanted, moving invisibly among his fellow men, he found out that the experience was nightmarish in the extreme, rendering him unable to do anything really… except to commit murder: "This invisibility, in fact, is only good in two cases: It's useful in getting away, it's useful in approaching. It's particularly useful, therefore, in killing. I can walk round a man, whatever weapon he has, choose my point, strike as I like. Dodge as I like. Escape as I like."

So, just to propose what we could call a kind of digital allegory:

The Invisible Man is like the anonymous poster, someone who wants to be part of things but to remain invisible at the same time - invisible, unaccountable, slipping away at a moment's notice, causing confusion or worse.

The Invisible Man wrapped in his costume is like a pseudonymous poster - someone who has put on the external trappings of an identity in order to be able to participate in human society and conversation.

I know there are some people here who are devoted anonymous posters. I know there are some people here using pseudonyms. Just speaking for myself, I think pseudonyms are fine - a very logical solution to the problem posed by anonymity. But as for anonymity, the more time I spend here at the discussion boards, the more I think anonymous posting is just a bad idea.

For those of you who post sometimes/always as anonymous, would you find the use of a pseudonym a barrier to posting? Or would that meet your needs...?